Iain Mitchell is an Engagement Manager for the Sight Loss Councils. He has a visual impairment, caused by Albinism, Nystagmus and photo sensitivity.

For Volunteer Managers Day, Iain reflects on his job and shares his advice on the importance of networking and seizing opportunities when looking for work.

Iain has had a long and varied career. He said: “I’ve re-invented my career more times than Madonna!” He worked as an actor, in social health care and 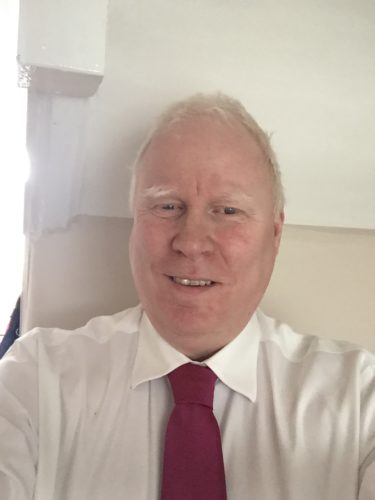 lectured at Leeds University on several undergraduate degrees including English & Drama, Dramatic Art and Theatre Acting. But his visual impairment made his work life challenging at times.

It was through the visually impaired community in Liverpool, Iain heard about the Engagement manager role at the Sight Loss Councils. “At the time, I was an Engagement manager for people living with autism. I understood the SLC job – the importance of developing networks and championing causes.”

Iain got the job and hasn’t looked back. He loves the variety the role brings. He said: “You have to do everything from recruiting visually impaired volunteers to building networks with local authorities and politicians. Then you are running the councils, chairing the meetings, coordinating those work streams, assigning tasks to the volunteers. It’s great!”

Iain said: “Sight Loss Councils are the only platform that I’m aware of, run purely by blind and partially sighted people. The councils address issues in their area and give visually impaired people a voice. That lived experience makes it unique. I’ve seen boardrooms and forums light up when someone stands up and talks about their lived experience. It opens doors.”

Iain says the most rewarding thing about his job is seeing the volunteers flourish. “You realise what you are achieving really does benefit people’s lives. To watch the volunteers – to see their confidence grow and how empowered they become is so heartening.”

A highlight of his role was being one of the hosts of the Bridge the Gap employment event with the Merseyside Sight Loss Council earlier in 2020.  Local businesses, representatives from the Department of Work and Pensions along with sight loss charities, came together in Anfield stadium to raise awareness of the barriers faced by blind and partially sighted job seekers. The event opened the channels of communication with employers with the goal to get more visually impaired people into work.

Iain said: “Out of that event, we have now formed an employment forum to try to find the solutions.

Following the success of his SLCs in Merseyside and Greater Manchester, Iain is now preparing to launch an SLC in York. Iain said: “It’s exciting, because you realise you are creating something that is going to give another group of blind and partially sighted people an opportunity to have their voices heard and to change their own futures.”

Iain’s work as an Engagement manager, along with his own experience in his career, has shown him how important it is for visually impaired people to advocate for themselves and not give up when it comes to landing that dream job.

He said: “Don’t let your visual impairment stop you doing what you want. We might have to work harder and convince people twice as much that we deserve the jobs we want. When you do that nothing should stand in your way.”

Iain is convinced networking is key. “When you’re networking, look for the simplest opportunities.  If it’s not the right person that you are talking to, it could well be that they can introduce you to the person that you need to meet. For example, one of the ways the Merseyside Sight Loss Council managed to get on to the Employment Skills Council in Liverpool, was because my local councillor knocked on my door asking for my vote. I struck up that conversation. I told her about my work with SLCs and she introduced me to other councillors in the area. Once you get that personal recommendation it opens a door twice as fast.”

How you can get involved