Businesses in the Merseyside region came together with blind and partially sighted people today to find out how they could increase the number of visually impaired people in the workforce.

The Bridge the Gap event challenged old myths around employing blind and partially sighted people and provided advice on the practical, financial and technical support available to employers.

Attending the event, District Judge Afzal OBE, the first blind judge in the UK, said: “If you have a diverse workforce it brings credibility, which is something businesses need to capitalise more on. I stopped being a blind barrister and became a barrister who happened to be blind. I was recognised for my talent.”

Hosted by Liverpool Football Club at its Anfield Stadium, the event was funded by the membership organisation for local sight loss charities, Visionary, and organised by a partnership of Merseyside Sight Loss Council, Bradbury Fields Services for Blind and Partially Sighted People and Jigsaw Coaching.

Garth Dallas, Chair of Liverpool Commonwealth Association, said: It’s about appreciating our differences and getting those differences celebrated. Equality is not about treating everyone the same. It’s about offering equality of opportunity and putting in reasonable adjustments. In order to be sustainable and survive, businesses have to engage beyond their shareholders. It makes good business sense, it’s not just the right thing to do. Inclusive and diverse businesses outperform those who are not.”

Jill Barlow from Jigsaw Coaching said: “Through our mentoring and coaching, we support people with a disability or long-term health condition to find meaningful work.  This event was a great opportunity for visually impaired people to showcase the skills they can bring to employers and will hopefully encourage more businesses to increase diversity in their workforce to create a more inclusive and fairer society.” 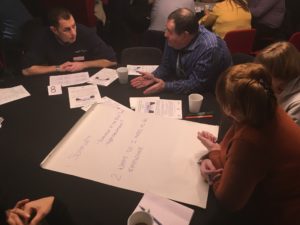 Iain Mitchell, Engagement Manager at Merseyside Sight Loss Council, said: “We blind and partially sighted people are well used to solving problems as we have learned to do this all through our lives.  This makes us a great asset to any company.  The development of assistive technology such as the screen-reading software Jaws and magnification programmes, has removed old barriers for blind and partially sighted people who want to work.”

Visionary’s CEO, Fiona Sandford, said: “Our vision is for a world in which visually impaired people can access the services they need at a local level and live the lives they want to lead.  Securing employment and working are often integral to people achieving their potential.”

Bradbury Fields (formerly known as the Liverpool Voluntary Society for the Blind) was established in 1857, to provide a service for blind people in their own homes.  It provides rehabilitation support and advice services, equipment, and a wide range of activity clubs.

Jigsaw Coaching is a community interest company offering coaching and support to people, including those who wouldn’t normally consider it or be able to access it. This can help them to gain clarity about what they want, increase their resilience and develop an action plan for their future.

Visionary is a membership organisation for local sight loss charities. Its vision is for a world in which people living with sight loss can access the services they need at a local level where and when they need them. Its Mission is to develop a strong national network of good quality local sight loss organisations, covering all parts of the UK, to help achieve this.