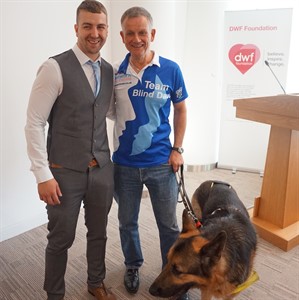 On Thursday 26th July, the Birmingham Sight Loss Council hosted its second West Midlands Working Age Forum event. The event was held at the offices of DWF Law, a corporate sponsor who provide us with meeting space, refreshments and sighted guiding support.

Each session of the WAF features a guest speaker who can offer advice, guidance or inspiration to our working age audience of people with sight loss. This quarter, the guest speaker was “Blind Dave” Heeley.

Dave is well known for his exploits and has always refused to be limited by his sight loss. He talked us through some of his major accomplishments including completing seven marathons in seven days on seven continents in 2008, the Marathon des Sables across the Sahara in 2015 and Escape from Alcatraz in 2016 for which he learnt to swim in open water.

Attendees were inspired by Dave’s ‘Can Do’ attitude and were keen to kick off the networking where participants had one on one time with him. The networking session followed a speed-dating format with two rows of attendees given two minutes to share a brief introduction before moving on to the next person. This technique allows everyone in the room the opportunity to make new connections that they can follow up in their free time, we have already seen some great friendships and support developing from this.

We would like to thank Dave Heeley and DWF Law for giving up their time for our forum.